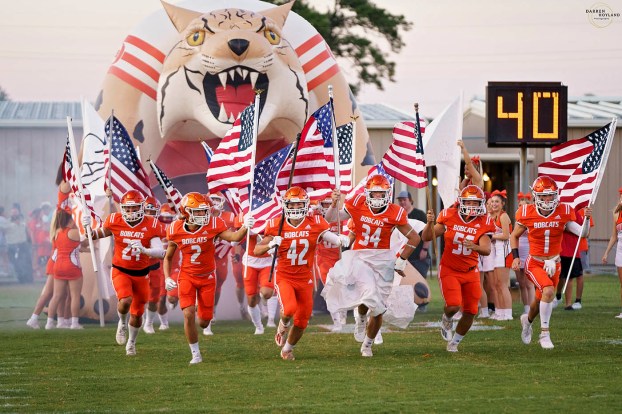 Photo courtesy Darren Hoyland The Orangefield Bobcats started off the District 11-4A Division II campaign with their first ever win over Silsbee DFriday night.

Bobcats down Silsbee 16-14 for first-ever win over Tigers

ORANGEFIELD – What a memorable night in Bobcat Country Friday night, and what a way to finish on Homecoming..

The Orangefield Bobcats beat out the Silsbee Tigers 16-14 with a thrilling last minute field goal to nail down a win in their District 11-4A Division I opener.

Bobcat freshman kicker Ty Butler was “ice” as he drilled a 27-yard field goal with nine seconds remaining as the crowd erupted at F.L. McLain Stadium.

The Bobcats outgained the Tigers 283-277 on the night.

The game started with two hot offenses trading blows back and forth. Right before halftime the defensive fronts from both sides stepped up and had enough with the scoring spree. Neither team found the end zone after the Bobcats touchdown to begin the second quarter.It was a wild back and forth between both teams that came down to the absolute wire to decide the winner.

Offensively for the Tigers, quarterback Mason Brisbane would try to lead his team to the win with a solid passing performance on the night. He threw for 130 yards including a 33-yard passing touchdown to his main target Dre’ion Miller. He wasn’t able to secure the win, but he had a great game under center.

The Tigers g0t on the board first with a quick opening drive score. Brisbane found Miller on the first play for a 17-yard pass. Marquis Dodd would finish the drive off the next play with a 40-yard run for the score. After the PAT the Tigers led 7-0 with 11:35 left in the first quarter.

The Bobcats countered back on the next drive with a touchdown of their own. Dischler would be the main source of yards on the march, with three runs over 10 yards on the drive and five first downs. Hunter Ashworth would finish the drive with a hard six-yard run into the end zone. After the PAT the Bobcats tied the game at 7-7 with 7:00 left in the first quarter.

The Tigers took the next drive to the house, this time thanks to a big pass from Brisbane. Marquis Dodd would get things started with a few good runs, then Brisbane found a big 30-yard pass to Miller again. Miller out ran the Bobcat secondary and scored on the play. The PAT would go in, giving the Tigers a 14-7 lead with 3:26 left in the first quarter.

The Bobcats scored on their next drive, keeping the ball in Dischler’s hands again for the score. Gavin Perry-Koci had a a big 30-yard run on a sweep to get the drive going for the Bobcats. Dischler would take over after, working his way down the field to finally put it in from 13 yards out. The extra-point attempt was wide, making the score 14-13 with 11:55 left in the second quarter.

Both defenses locked it down just before halftime, stopping anything that gets close. Be it interceptions or fumbles, both teams were out to win.

The Bobcats got the ball with just under six minutes left to play. Thanks to the burly Ashworth and the offensive line, they were able to slowly make their way down field and eat up the clock in the process. Brayden Parker found Morgan Sampson for a massive 50-yard catch in a third down situation. That pass let the Bobcats drive even deeper and set up a last minute field goal opportunity for the kicker Ty Butler. From about 27 yards out, Butler nailed it through to take a lead with just nine seconds on the clock and then were able to hold the Tigers down on a couple desperation passes.

What a thrilling end to the year’s first district battle. The Bobcats out lasted and out maneuverd the Tigers in a tough homecoming game. This game will go a long way with the district standings. These two should be fighting for the top spot when playoffs come, and the Bobcats took their first step in in a big way.

The Bobcats will have their bye week next week and will return to action Oct. 8 at Liberty. Silsbee will host Liberty next week.