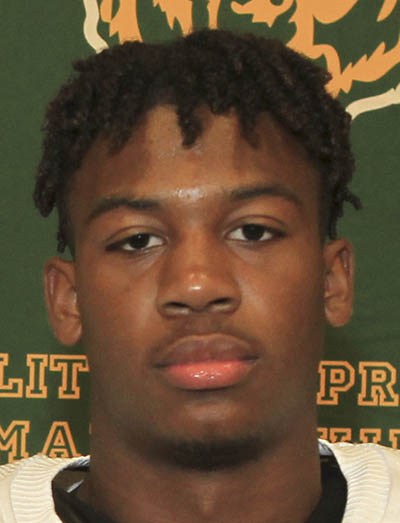 LC-M running back De’Marion Morris continued his torrid start for the Bears (2-1) as he zipped for 217 yards and three touchdowns, including a 82-yard jaunt to the end zone late in the fourth quarter.

The Warriors alternated quarterback Collin Willetts and Deuce Barrington. Willetts completed 8-of-14 passes for 72 yards while Barrington was 4-for-9 for 30 yards and an interception. The two combined for 29 yards on 10 carries.

Warrior running back Chad Gasper had 67 yards on 12 carries and Ifeanyi Monye had 40 yards on 14 carries. Ryan Miller had three catches for 40 yards while Nathan Salz had receptions for 28 yards.

The Warriors zipped 71 yards in 10 plays to get on the board midway through the first quarter.

Willetts completed 4-of-4 passes for 40 yards on the march. Nathan Salz capped it with a jet sweep around the right side from eight yards out. The extra-point kick failed as the Warriors led 6-0 with 6:17 in the first quarter.

The Bears retaliated nicely by going on a eight-play, 61 yard scoring drive.

Morris got the Bears in Jordan territory with a 14 yard run to the Warrior 47. Four plays later on fourth-and-4 Landry found Morris along the left side and Morris zipped 25 yards to the Jordan 17.

Three plays later Landry found receiver Peet sprinting over the middle for a 13-yard touchdown toss on third-and-6. Robbie Wedel booted the extra-point to give the Bears a 7-6 edge with 3:20 in the first quarter.

The Bears cashed in on a Jordan turnover after receiver Ryan Miller coughed up the ball at the Warrior 36 after a 11-yard pass.

The Bears promptly covered the 36 yards in seven plays.

Morris carried three times for 15 yards, including a nine-yard dart to the Warrior 2 and he ended up scoring on a one jaunt up the middle. The Bears failed on the two-point conversion run but led 13-6 with 1:05 in the first quarter.

After a booming 49-yard punt by Dean Reynolds down to the Jordan 2, the Warriors ate up the clock on a 13-play drive but the Bears defense held firm on a fourth-and-8 pass from the LC-M 31 that fell incomplete.

After the Warriors were called for pass interference, Landry hit Peet on the money over the middle for a 54-yard scoring strike. The extra-point kick failed as the Bears led 19-6 with 4:02 in the half.

At the end of the half the Warriors drove 22 yards in three plays but kicker Jake Kilander missed a 38-yard field goal attempt as time expired.

The Bears had 166 total yards in the half while the Warriors had 173.

Landry completed 7-of-13 passes for 127 yards with Peet hauling in three for 74 yards. Morris had 31 yards on seven carries. Roberts had three catches for 28 yards.

Early in the second half, Peet muffed a punt and the Warriors fell on it at the Bear 22. However, the Warriors went backwards and on third-and-23 from the 35, Barrington was picked off by the Bears’ Morris at the LC-M 3.

Morris started the march with runs of 27 and 12 and Landry hit tight Reynolds on a 11-yard strike to the Warrior 46. Landry hit Roberts with a nine-yard strike and two plays later Morris sprinted around the left side, broke a tackle and cruised 34 yards for the touchdown. The extra-point attempt failed as the Bears led 25-6 with 4:07 left in the third quarter.

The Bears halted a 14-play Warrior drive when they tackled Salz for a one-yard gain to the LC-M 2 on fourth-and-goal from the 3.

Four plays later Morris electrified the crowd with a 82-yard touchdown as he hit the right side, cut back over the middle and broke two late tackles to get into the end zone.

The Bears will finally get to host their first game of the season next week when they welcome in the Woodville Eagles.