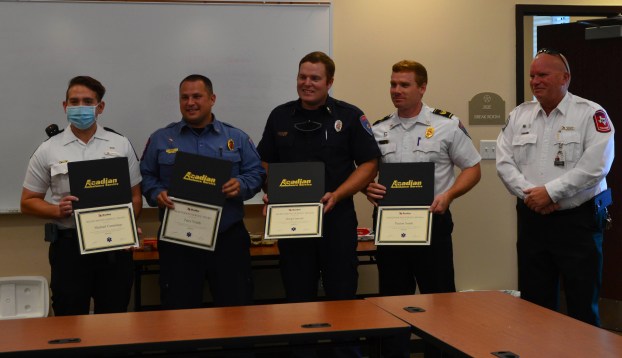 Acadian’s crew was dispatched along with Orange Fire Department (OFD) to a patient having a seizure at a gas station. The patient was traveling from Louisiana to Texas as a hitchhiker.

“He looked like he was sleeping in the vehicle,” Paramedic Field Supervisor Michael; Cummings said. “He was purple in the face and we started CPR right there on the concrete by the gas pump.”

Terry Veitch was with him. They agreed it was not the ideal situation or place but did what needed to be done to help the patient.

OFD Chief Payton Smith arrived on scene and advised that CPR had been started. Smith was doing compressions on the pavement.

Acadian’s crew defibrillated four times and got pulses back before intubating and transporting the patient to the hospital.

Cravens and Freeman checked on the patient a few days later and the patient was extubated, conscious and alert with no deficits and with a planned discharge home.

“We want to recognize the firefighters involved,” Burleigh said. “Thank you for the assistance you give.”

Burleigh added that it is rare for a patient to have no deficits after such an incident.

A medical deficit is a lack or impairment of a functional capacity cognitive deficits.

“For a patient to have a full recover with no deficit at all when discharged is low percentage wise,” Burleigh said. “It is five, maybe 10 percent at most.”

Meritorious Service Awards are in recognition of excellent life-saving contributions and dedication to emergency medical services.