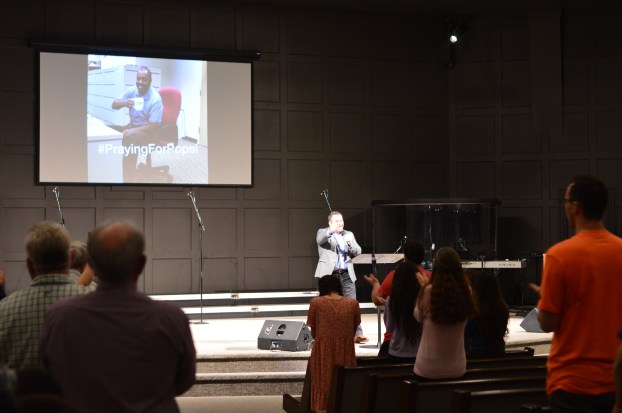 With three law enforcement officers in Orange County fighting for their lives, Eastgate Pentecostal Church in Vidor agreed to host a prayer vigil for them during its weekly Prayer meeting held each Monday at 7 p.m.

Corporal Dru Crochet, Deputy Scott Barnes, and Detective Howard DeVault are each suffering from medical issues. DeVault, better known as Popsi, is recovering from a stroke. Crochet and Barnes are dealing with COVID.

Crochet is currently on a ventilator in a Houston hospital.

“I want to see him back driving a vehicle that says, ‘In God we trust’,” Jim Hickory said as he rallied the crowd to pray for the corporal.

Barnes, with over 20 years of law enforcement experience, is suffering from long term effect of COVID.

Prayers were said for each of the three men before first responders in attendance were asked to step forward so they could be prayed over as well. Pinehurst Fire Department volunteers were among those present as well as a couple of EMTs and at least one nurse.

Approximately 200 persons attended the vigil which also prayed for Sheriff Mooney and the Sheriff’s Office as well as Vidor Police Chief Rod Carroll and Vidor Police Department. Almost all of those in attendance stood throughout the event. They ranged from a few months old to elderly.

The group also prayed for the family and spouses of law enforcement officers.

The event ended with prayers for the city of Vidor, city council and city manager.

“We are praying as we see a transition in leadership,” Minister Jeremy Fletcher said. “We are heading in the right direction.”