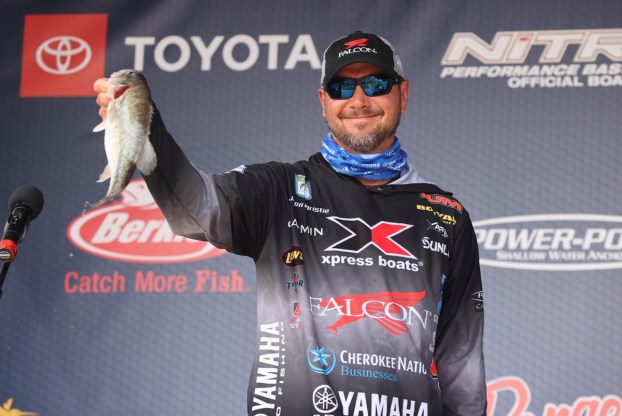 ORANGE, Texas — Jason Christie had more gas than he needed and more water than he wanted, but the Park Hill, Okla., angler’s three-day total of 35 pounds, 11 ounces allowed him to maintain his lead on Day 3 of the Dovetail Games Bassmaster Elite at Sabine River sponsored by Bassmaster Fishing 2022 – the official video game of B.A.S.S.

Christie placed second on Day 1 with 15-1 and took over the top spot Friday by adding 13-14. On Saturday, the Sabine was in a stingier mood and Christie found only a small limit of 6-12. He holds a 15-ounce lead over Day 1 leader Brock Mosley.

Returning to the same narrow backwater about two hours upriver, Christie found that increased water releases from Toledo Bend Dam had raised the water level in his region about 6 to 7 feet.

With the extra weight of a cameraperson and gear in his boat Friday and Saturday, Christie has been carefully monitoring fuel consumption. On Saturday, the high water facilitated his run but it inundated his playing field.

“Once I got about 15 miles from where I was going, the (river) water was up in the trees,” Christie said. “The good thing was I could run a little straighter line and I had more gas left, but it doesn’t help when you don’t catch a lot of fish.

Christie is a shallow-water specialist who surgically picks apart visible targets like the laydowns, cypress knees and cut banks abounding in his backwater spot. On Saturday, the extra water covered much of those features and scattered the bass into the surrounding forest.

Despite his flipping prowess, Christie relied on a 1/2-ounce chartreuse/white/blue Booyah Covert spinnerbait with tandem nickel and gold Colorado blades to catch a limit of spotted bass, including one about 2 1/4 pounds.

“There’s not that many (quality fish) in there and when you quadruple the amount of water, it just spreads them out,” he said. “I’m sure some people might say, ‘Pick up a flipping stick and go to work,’ but with only four hours to fish, I don’t have time to stop and flip.”

After losing a good fish early and struggling to find additional opportunities, Christie pushed farther into the creek. Days 1 and 2, he fished a half mile in. On Saturday, he went about twice as far.

Same as the first two days, Christie allowed himself sufficient time to make the downstream run to weigh-in. Arriving with time to spare, he flipped a few spots close to the ramp with a YUM Spine Craw and culled out his smallest spot with a largemouth.

Despite the changing conditions, Christie’s confident the area he’s fished for three days offers his best opportunity to win.

“I’ve just kept myself in the only place I feel like there’s a big concentration of fish,” he said. “If the water’s still high, I have a couple of places that I tried to get into in practice and I should be able to get into.

Hailing from Collinsville, Miss., Mosley ran 110 miles West to fish Clear Creek near the metro Houston area. He’s made that run each day, but Saturday yielded a small limit of 6-14 to go with his previous weights of 15-10 and 12-4. His three-day total is 34-12.

Mosley started with his game plan of fishing a 1/2-ounce chartreuse/white Z-Man JackHammer ChatterBait with a white Yamamoto Zako trailer along seawalls, docks and shoreline wood. On Saturday, he also reached deeper into the area’s backwaters.

“I don’t think my areas are necessarily going dry, but today it seemed like the tide stayed up and I never really felt like the water was moving really strong. I had a lot of bites, but they were just slapping it; they weren’t eating it like they were the last two days.”

Johnston, who became the first Canadian to win an Elite event with his 2020 victory at the St. Lawrence River, targeted shallow backwaters in the Neches River. He varied his presentations based on tide stage.

“I caught quite a few fish on an unweighted black floating worm when the water was low,” Johnston said. “That seems to be the way I can get a limit. I hadn’t caught any big fish on it all week, but today, I caught a 3 1/4-pounder on it.

“When the water gets back into the (vegetation), that’s when I flip. I caught my biggest fish (3 1/2) flipping a Strike King Rage Bug with a 3/8-ounce Woo Tungsten weight.”

Marc Frazier of Newnan, Ga., is in the lead for Phoenix Boats Big Bass honors with his 6-6 largemouth.

Seth Feider of New Market, Minn., leads the Bassmaster Angler of the Year standings with 343 points, followed by Patrick Walters of Summerville, S.C., with 333 and Drew Cook of Cairo, Ga., with 312.

Bryan New of Belmont, N.C., leads the Rookie of the Year standings with 261 points.

The remaining 10 anglers will take off at 6:45 a.m. CT Sunday from the City of Orange Boat Ramp. The weigh-in will be held at the ramp at 3 p.m.

Live coverage of the event can be streamed on Bassmaster.com and the FOX Sports digital platforms. FS1 will also broadcast the action live with the leaders beginning at 7 a.m. CT.