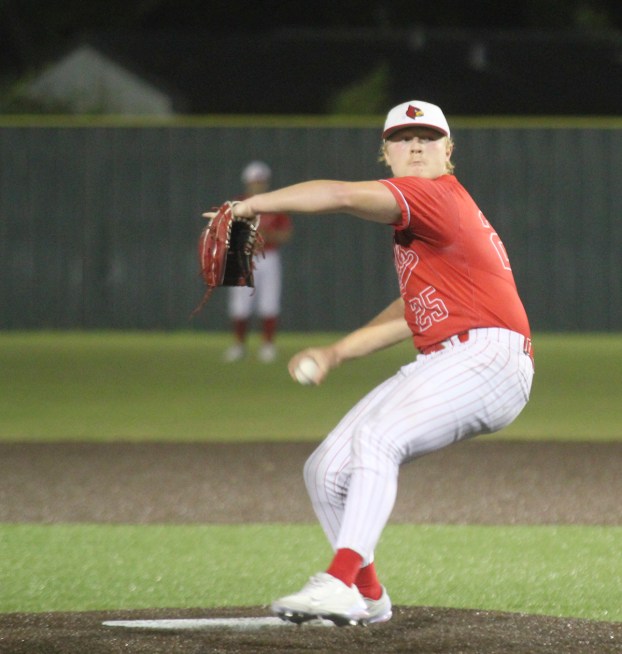 Sam Carpenter got the start on the bump for the Cardinals, and he was very effective and efficient once he got going.

The first inning was rough as the Bears got two early runs on a couple of big hits, but he would loosen up and find his rhythm. He would enter the seventh inning with 85 pitches thrown, leaving him 25 pitches to finish the seventh inning, allowing his defense to take care of most of the outs throughout the game.

Carpenter would go the distance and finish the game for the win in seven innings using 103 pitches, allowing four hits, two walks, while collecting seven strikeouts and one earned run given up. This win moves Carpenter to 6-0 on the season and shows why he’s the Cardinals’ top option on the mound.

Offensively, neither team had an amazing night, most of the runs came from either errors or wild pitches that got by the catchers.

For the Cardinals, Carpenter helped himself at the plate. He would go one for three at the plate with a single, reached on an error, walked, had two runs batted in and scored a run.

Anthony Bandiero would stand out for the Bears this game. He went one for two at the plate with a solo homerun and a walk. The homerun would make it a one-run game, but the Bears wouldn’t get any closer than that to the Cardinals.

The Bears came out swinging in the top of the first to take an early lead. Zach Krummel led off with a first pitch double to the left field fence. Austin Smith came up and smacked a liner past second base and let the speedy Krummel race around to home from second base. A walk to Anthony Bandiero and a sac fly from Dean Reynolds would put Smith on third base. A wild pitch from Carpenter allowed Smith to run home for the second run as the Bears took a 2-0 lead after the top of the first inning is done.

The Cardinals answered back with some offense of their own in the bottom of the first inning. Brice Swanton started with a big double to the left-center field fence. Carpenter hit a grounder to third, but an error on the throw allowed Swanton to score from second base and for Carpenter to get to second himself. Another error on Kade Benoit’s hit put runners on the corners, and a wild pitch let Carpenter come home for the score. The Cardinals would leave the bases loaded, but they tied the game at 2-2 after the first inning was done.

Bridge City took the lead in the bottom of the second inning. Draven Marlow opened with a single, followed by Slade Foreman taking a pitch to the elbow for a free base. A Swanton sacrifice bunt moved the runners up a base to bring up Carpenter. Carpenter got a hold of one and sent a liner to right center field to score both Marlow and Foreman from second and third base to give the Cardinals a two-run lead.

The Cardinals would extend their lead, thanks to a string of walks from the Bears. Marlow, Foreman and Carpenter would all walk to load the bases in the bottom of the sixth inning. A wild pitch let Marlow score from third and a sacrifice fly from Kade Benoit would score Foreman next as the Cardinals took a 6-3 lead heading into the top of the seventh inning.

The Bears wouldn’t go down without a fight, finding some life in the top of the seventh inning. McNeil connected on a single through the infield and swiped second base to put a runner in position to score. McNeil would steal third base but the throw went wide, allowing him to run home for the run.

Both teams will look for wins to start the second half of 22-4A play starting Friday. The Bears will venture to Ljmberton while the Cardinals play host to Vidor.