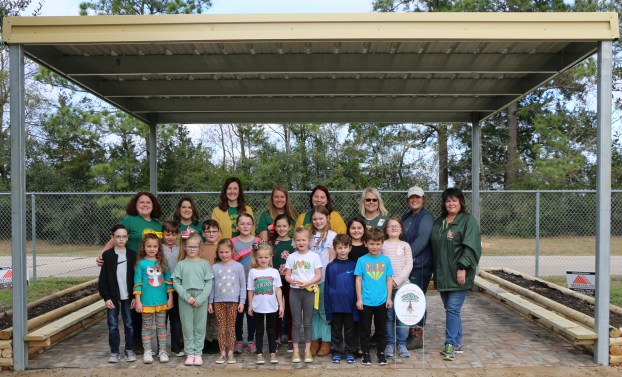 At a PTO fundraiser last year, the PTO earned enough money to construct two, one in each playground.

According to Kayla Casey, the LCE Principal, she has been hoping for outdoor classrooms so that classes can come outside for writing assignments and any other subject that would work for enhancing the traditional classroom.

The classrooms have benches on all but the front entrance, surrounded by planters and is handicap-accessible.

Frey’s Landscaping worked with Mueller to make the best use of the space as possible.

The site under the canopy is covered with pavers, but apparently getting it all set up was a muddy business with the amount of rain this past week.

The PTO is planning another fundraiser on February 14, an Adventure Dash Fun Run.

This money will be used for general improvements such as stage curtains, picnic tables, window wrapping, character trait posters, and hallway labeling, to name a few.

Casey emphasized that these improvements are all because of the support of PTO, and parents who have participated in the fundraising activities.

“We couldn’t do it without them,” she said.