By Eric Williams and Dawn Burleigh

A group of more than a dozen people gathered Sunday evening to pay their respects and mourn the life taken of two-year-old Savanna ‘Savi’ Roque.

Carmen White was the event sponsor for the candlelight service held.

White who works at a local hospice center said, “Death is expected in my line of work as it is natural, but not like this.” 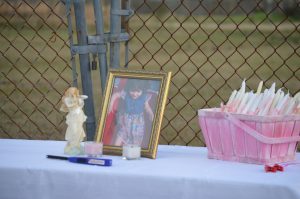 Eric Williams/The Orange Leader
The community pulls together as a candle light vigil is held for two-year-old Savanna Roque.

White put on the vigil because she was horrified to see a child slain like this.

Several local citizens learn about this event off of a Facebook page created by Memphis Curtis called Justice for Savi.

Curtis says, “I plan on keeping up with all of the memorial vigils that will be held for baby Savanna.”

Curtis designed the page due to her community was going through a time of grief and needed a place to come together.

So far there has been a great deal of support from the community and the page is growing daily. The page is a place where people can come to express their grief and offer prayer and support to the family during grieving time.

This was the first vigil that was put on by White and it was a time of comforting for the community. 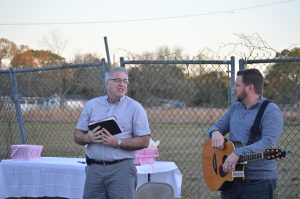 A prayer was offered by Rusk Willis and music performed by Jeremy Williams.

A second vigil was held Monday, despite the weather, at the Riverfront Pavilion in Orange.

“I will be there with an umbrella,” organizer Haley Williams said.

According to a public statement released by Marc Foster, great uncle to Savi, the focus of the family is getting Savi to Florida to bury her alongside her mother, Rachel.

Foster was hit by another vehicle and killed at the scene as she was assisting Yovahnis Roque, her boyfriend at the time. Roque, who was also struck, was badly injured. 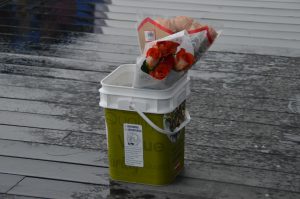 Savi was just a few weeks old when she lost her mother.

Roque faces the death penalty for the capital murder of his daughter.

During the arraignment, Roque claimed the government made him do it.